Entrepreneurs who create jobs receive a great deal of attention from policy makers and the media. This is because jobs created by a new business venture represent an advancement in almost all economic contexts. In lower-income economies, new jobs can absorb workers who may be under- or unemployed, while in high-income countries new jobs created by entrepreneurs often require unique, and potentially brand-new skills that contribute to an economy’s dynamism.

Before getting to this point however, entrepreneurs need to plan well in advance for new hires. This requires assessing their own growth targets and capacities, benchmarked against their economy’s pool of qualified labor and regulations pertaining to hiring and firing individuals. Therefore, the number of entrepreneurs who are planning to create jobs with their new business can signal something about both how an economy’s entrepreneurial ecosystem is functioning and how its labor force is viewed.

Every year, GEM teams collect data on how many entrepreneurs in their economy plan to create 0, 1-5, or 6+ jobs with their business in the next five years. With this information, teams calculate the High Job Creation Expectation indicator for their economy, which measures what percentage of their early-stage entrepreneurs (either actively planning or within the first 42 months of starting their new business) expect to create 6 or more jobs within the next five years.

Below is a chart of the 47 economies that participated in at least two of the last three GEM survey cycles from 2016 to 2018, graphed by the percentage of early-stage entrepreneurs who anticipate creating at least 6 jobs in the next five years: 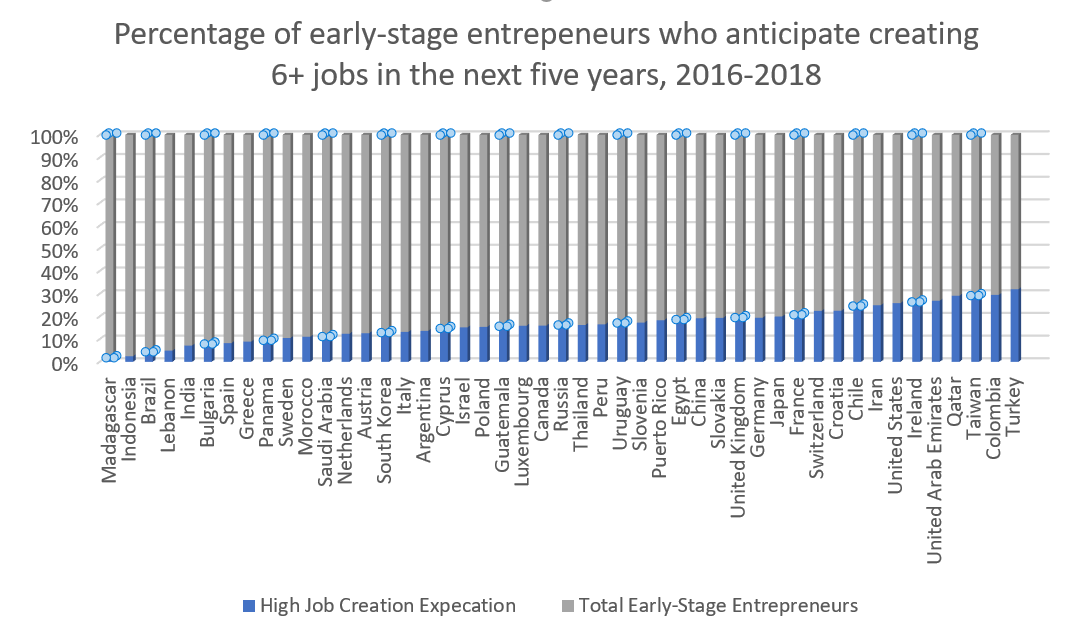 However, as with all macro data on entrepreneurs, context matters. As is evident in the chart above, the economies with the highest job creation expectations are a mix of high and lower-income countries, and the same roughly holds true for the lowest job creation expectations.  A mix of economy-specific factors such as availability of qualified labor, entrepreneurial confidence, technology, and business models among many other factors, contribute to this picture.

As noted in the GEM 2018-2019 Global Report, these factors contribute to the interesting case of the Netherlands where early-stage entrepreneurship has grown over time while high job creation expectations remain relatively low. Here, technology has enabled more flexible business models where workers are becoming early-stage entrepreneurs through the gig economy but have no intention of hiring employees. It will be interesting to see if this is a unique situation or it becomes the norm as on-demand services spread in other economies.